The Gs and little r

I didn't put this on FB, but feel like posting a blog about it :). I like having what I'm pretty sure is a much smaller audience here :).

I got a nose job. Just kidding, but I think some strangers may have thought so :). I had a small spot on my nose that was raw and not healing. I decided to go to the dermatologist and get it checked, and it was biopsied at my visit. I was really self conscious about wearing a really small circle bandaid on my nose afterwards. And, I was feeling like I might have been silly for going to the doctor. Turns out it was a good idea. I had pre-cancerous cells and some that had just switched to squamous cell carcinoma. Not as scary of a diagnosis as it may sound, you just have to get it removed.

I went in Friday looking normal and came out looking like this. (James and I laughed at me a lot that day :). Generally bandages are not funny, but this one stuck out so far and I looked like a clown.

I had a small skin graft using skin from my ear to fix the hole on my nose. I got to look at the open wound and the closed wound on my nose before the bandage. It was gross, but the nurse told me not to worry, it would heal well. I mostly hid/recovered at home until I took the big bandage off on Sunday. On Monday, it looked remarkably better from what I saw on Friday. And Monday was even better than Sunday. I'm now down to a smallish bandaid on my nose and one on my poor ear. The ear is the uncomfortable part, but not a big deal either. I feel pretty much normal now. Compared to the initial bandage, a little one seems like nothing. Probably also helped to finally get my hair washed at the Hair Lottery (Hair Cuttery) yesterday. I have to cover it for two weeks with a bandaid and then its an optional cosmetic thing after that.

I'm glad its all over, especially all those shots in my nose and ear. I was again complemented during surgery - I always put on a really brave front for medical staff :). My nerves made it very difficult to recall what my kids were for Halloween, though, when I was asked in the room before it started :). I can easily tell you now. Gillian was a Redskin cheerleader, George was Bobafet, and Reuben was Spiderman. This would be a great place to insert a picture if I had one. They were cute, trust me :).

Wear your sunscreen and sunscreen your small children! Happy Fall!
at 6:47 AM 4 comments:

Been thinking about blogging again. It's funny to look at the picture below. When that picture was taken, those things were brand new to me, now most of them are familiar items in our home. The mantel has been painted and attached to a wall. The jumpolene has been jumped on a million times. Fun, and it will soon be time for the spring yard sale!

I started a food journal today, among other things I'm doing to try to lose weight... like mall walking. I thought it would be more of a winter thing for me, but I'm enjoying it so much, I might keep doing it during the spring and summer. I like being there when it is so calm. I like seeing people working on window displays. I like the artichoke plates and pottery colanders in the Pottery Barn window. I like being one of the younger walkers. I like my new walking shoes. I like seeing the delivery of fresh strawberries sitting outside Godiva waiting to be dipped in chocolate and all the milk waiting to go inside Caribou Coffee. I like that it's easier than the Jillian Micheal's workout I do later in the day. I like listening to the radio on the way in, and that I'm driving to walk in the mall instead of driving to work. I could go on and on about it, like I just did :).

The Gs are doing great in school, they like it most of the time. Reuben is looking forward to going a long time from now. A big chunk of our day is made up of getting us to and from school and preparing for it. We also play a little outside. Play Wii, play hockey and tackle football in the basement. Craft. Clean. Watch too much tv. Check FB too often. I can't wait for Spring. Hoping to be more adventurous and outside a lot. The kids and I have been talking about the spring/summer birthdays coming up. Gillian wants some kind of fashion party. George wants to have a party on a kids football field. I think we'll be heading to Dinosaurland for Reuben's big day. I'm dreaming of picnicking with blue crabs from the DC Waterfront Fish Market. Looking forward to flowers coming out that we can pick and bring inside! I am thankful that this winter is almost over, come quickly spring!
at 9:21 AM 6 comments: 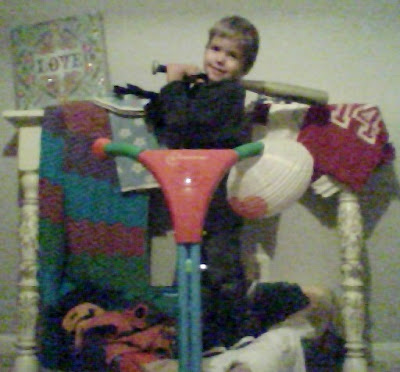 Can't find our camera, so the picture isn't so hot. I had the best time this morning at the big yard sale I go to twice a year. Two fun friends came to my house before 6am, and we headed in the dark to the sale. I got lots of fun stuff. A big mantel with lots of potential. Some fun stuff for Gillian: LOVE wall thing, knitted blanket, paper lantern, hat and scarf. A pair of gloves for me. A bat for George. Tons of clothes and a pair of shoes for Reuben. A big jumpy thing that Reuben looks really cute jumping on... Lots of things were almost or brand new, all for under $60! Yay!

The G's are in school! 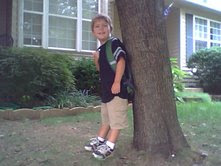 Adorable George had his first day of school, ever, today. James took the day off for his big day. We wanted to take him to lunch, and I was happy he chose Chick-Fil-A, which means he prefers it over McDonald's again. He was super happy and excited all day. He wore his tennis shoes to school, he said there might be a race. He also thought there would be a kids baseball game. I was a little worried that preschool would not live up to the fantasy preschool he had in his head, but he still liked it. Phew! He has the same teacher that Gillian had her second year, and is in good hands. And his Aunt Ellyn is down the hall. He is first on the calendar for taking snack. And, tomorrow he wants to wear his wolf shirt that he asked me to make for him. Tomorrow is the first real day of school, today was orientation. I'm looking forward to seeing him walk in tomorrow, he's going to be the cutest - and then I'm hoping his cute little brother will fall asleep between school and home, and stay that way as I carry him in to our house where I will be balancing housework and rest most Tuesday through Friday afternoons until next summer. That's my school afternoons fantasy that I'm depending on coming true!

That was Gillian on her second day of school (we do have pics of her first day, they are just not easily accessible right now). She suggested that her shirt would have a little girl wearing a backpack walking her dog who is sniffing a flower on it :). I made two different ones for her to choose from. She wanted to wear one the first day and one the next. Tomorrow she will be wearing more normal clothing :), but the same jeans. She really likes them. I might need to tell her teacher that I wash them every day, in case she starts to wonder about her wearing them every day :). Gillian actually has a sub for the first few weeks of school. She is a retired teacher who has come back to sub while her teacher is on leave, taking care of her brother who was having surgery. James suggested to Gillian that she uses George being sick as an excuse for missing school :). I'm glad she's old enough that she understands the humor in that and how that should just be family joke, or at least I hope she does :). Gillian likes that she has her own desk with some of her own school supplies in it. Kindergarten was a community supply type set up. She also likes that as a first grader, she can play on the black top during recess, kindergartners are not allowed. It's a much longer day for her, but so far, so good!

I am happy for the G's! And to be quite frank, for myself :). I am really looking forward to my school afternoons. I am happy and blessed!
at 10:49 PM 4 comments:

I have been saving a recipe for homemade bubbles from a really neat book that a friend gave me for a baby gift years and years ago. Today I made a batch for the first time. I was already not a fan of the store bought ones. I didn't like how the wand would always fall inside the bottle and it was often hard to get it out, the whole who is going to be blowing the bubbles battle, and how most of the bubble solution could be gone from the quickest spill.

The recipe calls for 1/2 cup of corn syrup, 2 cups of dish soap, and 5 cups of warm water whisked together in a bowl. I decided to make half that amount, and in couple of minutes I had a giant bowl of bubble solution ready to go. I went outside with the boys to try it out. We dipped our wandless hands into the water and I made an O shape with my hand to blow bubbles out of. The boys had a little trouble with this, but I'm sure they can learn to do the same. We have a bunch left over to try again and again.

I am not sure who had more fun with this, me or the boys. It made me feel more like the Martha Stewart-y mother I had dreams of being :). I feel like I'm moving out of the baby years, and I can tell it's getting easier for me to do things like this, and to get more done around the house, and to make dinner before James gets home. There's a little baby left in Reuben, though, and I sure am treasuring it!
at 7:08 PM 2 comments: